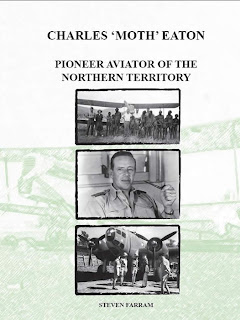 Group Captain Charles Eaton, OBE, AFC, MID, Knight Commander in the Order of Orange Nassau with Swords, received numerous honours during his lifetime, as his full title illustrates. He is remembered in the Northern Territory in a number of ways as well. There is a Lake Eaton in Central Australia and an Eaton Place in the Darwin suburb of Karama. Charles Eaton Drive leads into the Darwin International Airport, where Eaton’s portrait can be seen hanging in the arrivals hall. Moreover, the location of the airport is soon to be named Eaton also. There is a display dedicated to Eaton in the Northern Territory Parliament, and a National Trust memorial celebrating him at the Tennant Creek Airport, in which town a block of flats was named in his honour as well. But perhaps his favourite memorial would be the Charles ‘Moth’ Eaton Saloon Bar in the Tennant Creek Goldfields Hotel. But who was Charles Eaton and what did he do to be memorialised in such ways? Illustrated with many rare photographs, this book outlines the contributions made to Northern Territory aviation by one of its early prominent figures, Charles ‘Moth’ Eaton.

Posted by Mitch Williamson at 10:46 AM