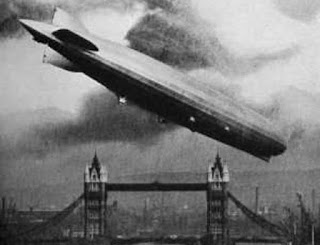 The Germans first attempted to break British morale by launching a series of Airship raids on Great Britain - (only Airships had the range and bomb capacity to attack Britain in 1915; heavier than air aircraft had not been developed enough to be used). By 1917 it was apparent that the airship raids had failed because they were too vulnerable to AA fire and British fighter aircraft, aided by searchlights. It is an interesting window into the future that the last German Airship to be shot down was shot down by a naval Lt. S D Culley, who took off at sea from a towed lighter flying a Sopwith Camel - the precursor of the aircraft carrier.

Following the failure of airships, the next German attempt to break British morale was to use heavy bombers, 'Gothas' and the very large 'Giants'. These could carry 6 hundredweight (300 kilograms) bombs. Daylight attacks, starting in May 1917, failed due to British Home fighter defence and night attacks were accordingly started, the "Moonlight Raids" . However British defences included AA guns, formed into a barrier some 25 miles from London, were sited to split up the attackers and make them more vulnerable to fighter aircraft. The raids were tracked by Sound Locators and the defences in the path of the attack were alerted. The Sound Locators were very effective for identification of the Gothas but the Giants were so noisy that they initially confused their operators who thought that the Giants were Gothas but were much closer!

The biggest air-raid of the war was to be combined with the German March 1918 Offensive against the British on the Western Front; forty aircraft set out but only 13 reached London and ten crashed during or after the raid.

The statistics of the German aeroplane offensive are instructive, demonstrating how Airpower could not possibly have succeeded in attaining victory, nor indeed in inflicting any significant damage to the Britain's war effort.

During the whole war, 9000 bombs, weighing 2890 ton, were dropped by 51 Airship and 52 Aeroplane attacks. London was bombed 12 times by Airship and 192 times by aeroplanes.

No source given for these numbers but the book's bibliography does include Morris's book which is listed with a copyright date of 1920.
Posted by Mitch Williamson at 11:49 PM