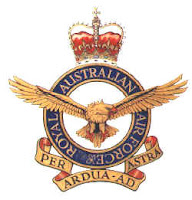 The Royal Australian Air Force had its humble beginnings in September 1912 as the Australian Flying Corps when a flight of four aircraft was authorized for the army. In 1913, its first two pilots went to England and returned with five aircraft and number of maintenance personnel. A total of 2,275 RAAF personnel served with British aviation forces during World War I.
Starting in January 1929, brushfire-spotting became a new mission for the RAAF. This was followed a year later by dusting for pest control.
With World War II looming, two major training expansions were instituted in 1938 and 1939. Plans were made for 32 squadrons with 360 aircraft in June 1940, but this was increased to 73 squadrons in May 1941. The RAAF began combat operations during World War II in the Southwest Pacific alongside U.S. forces. Eventually, the RAAF had squadrons fighting in almost every theater of the war. By the end of World War II, the RAAF comprised 3,187 first-line aircraft dispersed in 52 squadrons. Their missions included fighter, bomber, reconnaissance, antisubmarine, clandestine operations, and transport.
The first jets to enter RAAF service were de Havilland Vampires in May 1946.These were followed by Gloster Meteors and North American Sabres. The RAAF was part of the UN operation in Korea,employing its Meteors.
When the South Vietnamese government asked for assistance through the Southeast Asia Treaty Organization, the Australians joined the anticommunist efforts. During the Vietnam War, RAAF Bell Iroquois helicopters supported Australian ground forces. An RAAF English Electric Canberra squadron served alongside a USAF Martin B-57 Canberra wing for more than four years. Another RAAF squadron provided airlift support operations with de Havilland Caribous between 1964 and 1971.
Maritime patrol operations began in World War II with Avro Lancasters and Consolidated Liberators. Subsequently Avro Lincolns were employed along with a number of large flying boats. This mission was then performed by Lockheed Neptunes and, later, Lockheed Orions.
During the early 1970s, the RAAF leased 24 USAF Mc-Donnell F-4E Phantom IIs until they were replaced by the General Dynamics F-111C. The Lockheed Hercules entered the RAAF inventory in 1958 and has since became the mainstay of RAAF transport units.
Wherever and whenever called upon, the RAAF has served Australia, the British Empire, and the United Nations. A staunch supporter of U.S. interests,RAAF personnel bring professionalism to every operation they undertake.
References Green,William, and John Fricker. The Air Forces of the World. New York: Hanover House, 1958. Parnell,Neville, and Trevor Boughton. Flypast: A Record of Aviation in Australia. A Civil Aviation Authority bicentennial project. Canberra: Australian Government Publishing Service, 1988.
Posted by Mitch Williamson at 11:00 PM