Bombing of Darwin: 70 years on 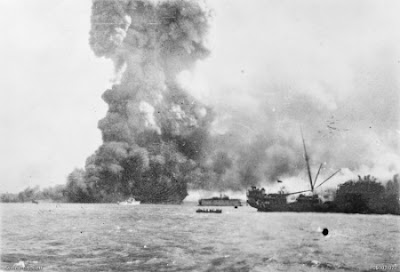 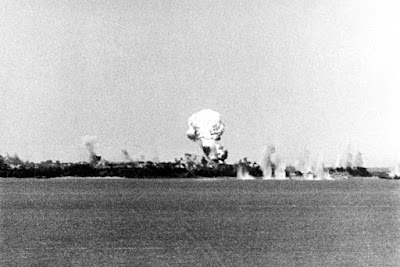 Japanese bombs land inland and along the foreshore of Darwin harbour during the first air raid on February 19, 1943. (ref - 012953) 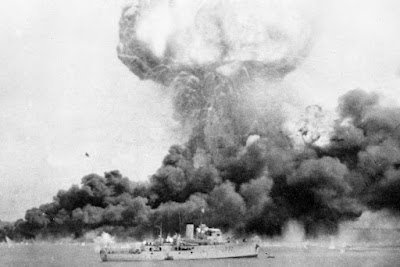 Dense clouds of smoke rise from oil tanks hit during the first Japanese air raid on Australia's mainland, February 19, 1942. In the foreground is HMAS Deloraine, which escaped damage. (Ref - 128108) 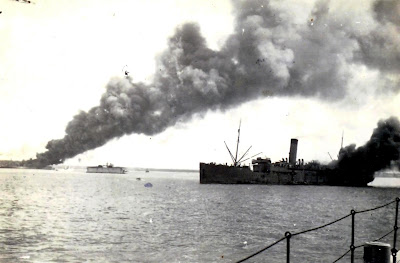 1942-02-19. Darwin, NT. The Australian merchant ship, Zealandia, on fire in Darwin Harbour after receiving a direct hit during the first Japanese raid on Darwin by naval aircraft from the Japanese 1st and 2nd carrier divisions. This photograph was taken from HMAS Swan by a member of the crew. (donor P Schneider) (Ref - P01214.003)

An air campaign mounted by Japanese forces against Australia’s major northern port city, in what was the first time that Australia as a sovereign state had come under direct attack from a foreign enemy. Although other northern centres were also raided from the air in this period, Darwin was the principal target of the Japanese. In the twenty-month period between 19 February 1942 and 12 November 1943, a total of 64 attacks took place.

The first and biggest raid was that of 19 February which was carried out by two formations of naval aircraft. The first wave (of 188) was launched from four aircraft carriers of the First Carrier Fleet under Vice-Admiral Chuichi Nagumo, positioned in the Arafura Sea off the eastern tip of Timor about 350 kilometres north-west of Darwin, while the second (comprising 54 land-based machines of the 1st Air Attack Force) flew off from captured airfields at Kendari in the Celebes and at Ambon. The object of the attack was to eliminate Darwin’s utility as a base from which the Allies could interfere with the Japanese invasion of Timor, which was due to begin the following day, and also the invasion of Java which was in preparation. The capacity of Darwin-based forces to cause problems for either of these operations, however, had been overestimated. This has led to suggestions in later years that the Japanese used ‘a sledgehammer to crack an egg’.

Darwin nonetheless represented a most attractive target at the time, with 47 naval and merchant ships crowded in the harbour. The air defences for so important a base were totally inadequate, comprising just two RAAF squadrons—nos.12 and 13— equipped with a mixture of modern Lockheed Hudson and obsolete Avro Anson medium bomber and reconnaissance aircraft, and Australian-made Wirraway advanced trainers. Due to dispersal policies, only nine Hudsons and five unserviceable Wirraways were at Darwin on 19 February; six of the Hudsons were aircraft of No.2 Squadron, RAAF, which had just arrived that morning on evacuation from Timor. Also present were ten P40 Kittyhawk fighters of the US Army Air Force, which were staging through on their way to Java.

Early warning of the incoming raiders was available to Darwin’s defenders from several sources—among them a navy coastwatcher on Melville Island and a Catholic missionary on Bathurst Island—but, through confusion, these reports were not handled expeditiously by RAAF operations staff. The information was also passed to the senior naval officer, Captain Edward Thomas, who was reportedly expecting precisely such an attack by the enemy, yet he failed to override a decision at the Area Combined Headquarters to disregard the reports. Consequently, when the alert was finally sounded at 9.58 a.m. the first group of 27 Japanese bombers were already practically over the town, approaching from the south-east at 14,000 feet.

The attack commenced when nine low-flying Zero fighters strafed an auxiliary minesweeper, HMAS Gunbar, as she passed through the harbour boom moments before the first air-raid siren wailed the alarm. Other shipping riding at anchor was then subjected to devastating pattern-bombing, dive bombing and machine-gun sweeps which sank three naval vessels and five merchantmen, and saw another ten ships of various types damaged. More bombs fell in the town itself, adding some fifteen civilians to the day’s death toll of at least 243; this figure was not necessarily complete but merely represented the best assessment possible at the time. The number of wounded was not less than 250, and according to some sources went as high as 320.

While the largest number of casualties were among ships’ crews, equally bad was the scene at the wharf. Here, a hit from just one heavy bomb at the land-end of the jetty killed 21 labourers gathered for their morning break, blew a locomotive into the sea, and demolished a span so that men remaining on the wharf were separated from the shore. Several vessels anchored alongside, denied any hope of manoeuvring out of danger, were ‘sitting ducks’. The 6,600-tonne motor vessel Neptuna was set on fire and blew apart after flames reached 200 depth charges stored in her hold.

Allied fighter opposition to the attack was quickly brushed aside and destroyed. Four of five Kittyhawks on patrol over the town when the first Japanese planes arrived were shot down, as were all five of another flight which had been refuelling and attempted to get airborne as the attack commenced. Darwin was completely at the mercy of the Japanese by the time the ‘all clear’ was sounded at 10.40 a.m. Eighty minutes later, the second wave of aircraft arrived to renew the assault for a further twenty minutes. This time the focus was the RAAF station, which was subjected to medium-level pattern-bombing. Only six lives were lost here, but nine aircraft were destroyed on the ground—including six Hudsons—and most of the base’s buildings were wrecked.

Local reaction to this first attack later attracted severe criticism, so that—even though news of the extent of the disaster was strictly suppressed—the government felt it necessary to appoint a commission of inquiry under Justice Charles Lowe to examine events surrounding it. Both civilians and servicemen were accused of fleeing the town in panic, or of engaging in unrestrained looting of damaged and abandoned premises. Incidents of both undoubtedly occurred amid the confusion and muddle which inevitably followed such an event, but their extent and nature have been greatly exaggerated. By many reliable accounts, the exodus which did take place (in the expectation that the raid was the prelude to a seaborne invasion) was hurried yet otherwise quite orderly.

Irrespective of the controversy generated, it remained indisputable that the Japanese had scored a major success at very little cost. In addition to the damage inflicted at Darwin, the flight-path of the attacking formations had accidentally passed over two Filipino-manned ships carrying supplies for US forces besieged on Corregidor, and a US Navy Catalina amphibious aircraft; all were destroyed. Claims of the number of attacking aircraft lost during 19 February vary widely, from two which the Japanese officially admitted to the five ‘certainties’ and five ‘probables’ maintained by the Australian services; the best and most plausible estimate is seven. The pilot of a Zero which crash-landed on Melville Island was captured by a Tiwi Aborigine and delivered into army hands, becoming the first prisoner of war taken on Australian soil.

Although further air attacks were made at irregular intervals, it was not until 25 April that a comparatively large number of aircraft (24 bombers with twelve escorting fighters) were again used. The raid launched two days later from Koepang was even larger, this time comprising sixteen bombers and 27 fighters, but losses caused by bombing during the month were—with a couple of exceptions— not very extensive. On 2 April a fuel storage tank was hit and about 30,000 gallons (136,000 litres) burned, while on 27 April buildings, water and power supply lines received significant damage. Four raids in June were on a similar scale (18–27 bombers), but thereafter mainly small numbers of aircraft were used in ineffective night attacks. The enemy returned in force on 30 July when 27 bombers and 15–20 fighters appeared over the town, and three raids on 23, 26 and 27 November were again relatively heavy, with 12–18 bombers being employed.

By the first months of 1943 the attacks were becoming less frequent but still occasionally involved large numbers of aircraft. That on 15 March—Darwin’s fifty-third raid—saw 24 bombers and fifteen fighters engaged; that on 20 June used 30 bombers and 21 fighters, and was undertaken for the first time by the Japanese Army’s 7th Air Division on Timor. Not just Darwin but inland airstrips up to 100 kilometres to the south were targets of the Japanese campaign. Hughes was attacked in August and again in November 1942, Livingstone in September 1942, Batchelor and Pell in October 1942, while Coomalie was hit on 2 March 1943.

Initially unable to match the Japanese in numbers or operational performance of aircraft, nor tactics, the Allied air units progressively built up in the area and became more proficient, and increasingly exacted a toll on the enemy’s raiding missions. Particularly notable for its success in the air was the USAAF’s 49th Fighter Group. By the time the three squadrons of this formation left the area in September 1942, their members claimed 75 enemy machines shot down for the loss of twenty of their own aircraft, and they had virtually put a stop to daylight raids.

The arrival at Darwin in January 1943 of three squadrons of Mark V Spitfire fighters, specially sent out from England amid great secrecy in June 1942, decisively tipped the balance against the Japanese. Although these units—formed into No.1 Fighter Wing, RAAF, under Group Captain Allan Walters and later Group Captain Clive Caldwell— had some setbacks in gaining this ascendancy, by mid-year the rate of Japanese losses had become so severe as to make Darwin an unprofitable target. Despite the Fighter Wing losing 44 of its own aircraft in its first six months of combat, only seventeen had been directly caused by enemy action; and in return, the Spitfires had accounted for 63 Japanese machines and probably destroyed thirteen more. Public awareness of what happened at Darwin in February 1942 did not become widespread until 1945, when the report of the Lowe commission was finally released. The myth of the ‘shameful’ evacuation stemmed from half-true publicity generated by newspapers at that time and perpetuated since by several sensationalised accounts.
Posted by Mitch Williamson at 1:44 PM