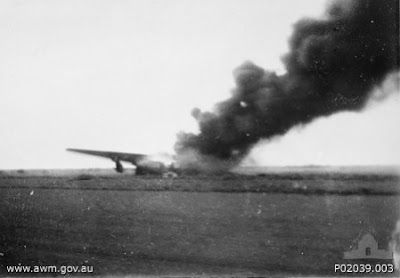 An aircraft burning at Broome, Western Australia following the Japanese air raid on the town on 3 March 1942. The aircraft is probably a United States B-24 Liberator 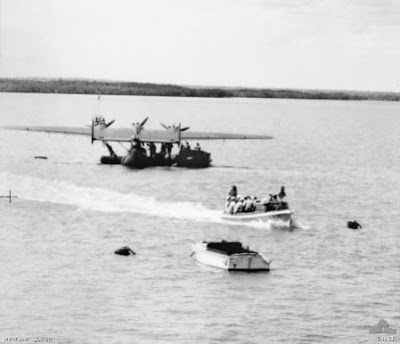 Transporting passengers to and from a Dutch seaplane in Roebuck Bay near Broome, a few months before the attack.

Broome, the pearling town on the north coast of Western Australia, was subjected to four Japanese air attacks between March 1942 and August 1943. The first attack came while the limited port facilities were heavily stretched coping with a large influx of refugees fleeing the Japanese invasion of the Netherlands East Indies. During the last stages of this evacuation, flying boats and land planes had been operating a shuttle service from Broome to bring out thousands of Allied personnel and Dutch civilians from Tjilatjap, on the south coast of Java. As a consequence, there were sixteen big flying boats moored in Roebuck Bay at dawn on 3 March—all highly vulnerable in an area only 2,400 metres long and 1,200 metres wide.

The appearance of a Japanese reconnaissance plane about 3 p.m. the previous day had been an unmistakable portent that an enemy attack was possible, indeed likely, yet pilots ignored warnings to leave at the first opportunity after daybreak. Only one aircraft—a small float-plane from the American cruiser Houston, sunk two days earlier in the Bantam Bay battle—had taken off from the alighting area that morning before nine long-range Zero fighters dropped down from the overcast at 9.20 a.m. Six of the attacking aircraft, flying in line-ahead formation, swept in from the sea and crossed the harbour entrance at a height of about 500 feet, while another three circled overhead as a protection against opposing fighters (of which there were none).

Three of the Zeros concentrated on strafing the moored flying boats, their explosive bullets quickly accounting for every one of them. Several of the trapped aircraft had been almost ready for take-off and were filled with passengers, many of them women and children, who were forced to take to the water. The Japanese pilots showed restraint in not further attacking those thus rendered helpless, or a party of 25 evacuees who were gathered on the wharf about to board their aircraft, but casualties were nonetheless heavy.

While these scenes were being played out on the harbour, the second attack group of three Zeros turned their attention to the aerodrome. Seven Allied aircraft had been standing there when the attack began: a RAAF Hudson bomber, a Dutch Lodestar bomber and a Dutch DC–3 cargo plane, and two American B–17E Flying Fortress and two B–24 Liberator bombers. One of the Liberators, carrying 33 passengers and crew, attempted to take off as the Zeros began their attack runs. It was promptly shot down into the sea in flames, and the other machines were all destroyed on the ground.

Within fifteen minutes the Japanese pilots had fulfilled their mission and departed on a return course for their base. When about 80 kilometres north of Broome they encountered another Dutch DC–3, one of the last Allied aircraft to escape from Java, which happened to be carrying a large quantity of diamonds. This was also promptly shot down, raising the Zeros’ tally of Allied aircraft destroyed to 24. In fact, the pilot of this machine managed to crash-land on the beach at Carnot Bay, from where a number of its passengers were rescued by missionaries from Beagle Bay several days later.

The number of people killed in the raid has never been determined accurately but is estimated at 70, including 32 who perished in the downed Liberator; approximately another 30 people were wounded. As Gillison’s volume of the Official History states:

The evacuation of civilians from Java was conducted with inevitable haste and later, in the war cemetery at Broome, the graves of 29 unidentified victims of the raid gave solemn proof of the absence of records listing the names of the passengers embarked in Java.

The Japanese attackers did not escape unscathed, having been forced to fly through a considerable volume of machine-gun and rifle fire from the flying boats and personnel on the shore. Most notable was a Dutch air force crewman who took up a machine-gun which had been removed from its mountings for repair and cradled it in his arms to engage any Zero which came within range, despite suffering burns to his arm supporting the gun’s barrel. One of the attackers was shot down and crashed, and damage from ground fire forced another to ditch near Roti Island while returning to base at Koepang in Timor (the pilot not being rescued until 21 March). Bullet holes were found in six of the seven aircraft which reached their base safely.

At 10.45 a.m. on 20 March Broome’s aerodrome was the target of a raid by seven bombers. During this attack the north–south runway was cratered and rendered temporarily unusable by several explosions, a Stinson civil aircraft was burnt out, but there was only one fatal casualty recorded. Further attacks on 27 August 1942 and 16 August 1943 produced neither damage nor casualties.

Posted by Mitch Williamson at 1:48 PM