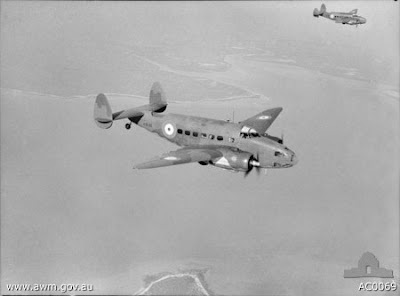 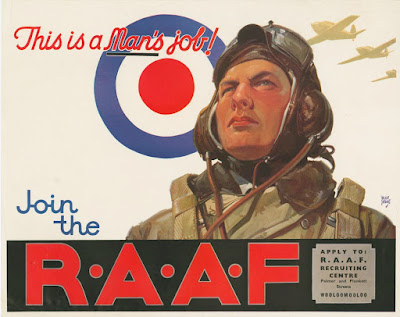 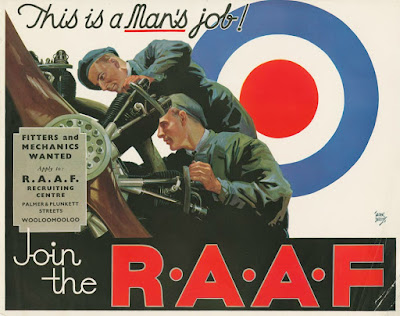 The Royal Australian Air Force (RAAF) played an important role in the Allied war effort. At the beginning of the conflict, the RAAF was a small, ill-equipped, but well-trained force of 3,489 personnel and 146 mostly obsolete aircraft. These included Anson bombers, flying boats, and the Australian Wirraway, essentially a training aircraft that proved totally inadequate as a fighter. When the war began in September 1939, one squadron was en route to Great Britain to secure new aircraft. The Australian government released this squadron to serve with the Royal Air Force (RAF), which it did for the remainder of the war under the auspices of RAF Coastal Command. In this role, the Australian squadron was responsible for sinking six submarines. Other squadrons served under the RAF in the Middle East and in the Italian Campaigns. Although there were 17 formal RAAF squadrons during the war, Australian pilots served in more than 200 individual Commonwealth squadrons.

To facilitate air training, representatives of the Commonwealth established the Empire Air Training Scheme. This brought potential pilots to Australia for initial training and then sent them to Canada for final flight school and dispatch to Great Britain to serve in the RAF. The RAAF established several flight schools in Australia for a program that eventually trained some 37,000 pilots.

The initial deployment of RAAF assets was to support the war in Europe. Thorough training took time, and it was not until the Battle of Britain was over that Australia's first, and justifiably famous No. 452 (Spitfire) Squadron was formed in April 1941. The squadron soon produced a number of outstanding aces and was commanded by the famous Wg-Cdr "Paddy" Finucane, D. S. O., D. F. c. and two Bars, who welded the unit into a highly efficient fighting team. Such was their success that for the four months from August to November 1941, No. 452 became and remained the top scoring squadron of British Fighter Command.

Before this, however, members of No. 10 Squadron had gone to England to take delivery of their Sunderland aircraft, which were to be used for Australian coastal defence. But when war became a certainty, the aircraft and crews were at once placed at the disposal of the R. A. F. As such, No. 10 became the first Commonwealth squadron to go into action in World War II. In the extended see-saw battle against U-boats in the Atlantic, No. 10 scored many noteworthy successes and was later joined by No. 461, a second R. A. A. F. Sunderland squadron formed for similar duties. Perhaps the most startling event concerned a No. 461 Squadron Sunderland piloted by Flt-Lt C. B. Walker which encountered eight German Ju 88 fighters over the Bay of Biscay on 2nd June 1943. In a series of furious attacks lasting 45 minutes, the Ju 88s almost shot the lumbering Sunderland to pieces but they paid dearly for their determination to finish off the crippled machine - three were positively destroyed, a fourth probably destroyed and a fifth badly damaged. The Sunderland, too riddled with bullet holes to carry out a normal landing, crash landed and was destroyed on the beach at Marazion, Cornwall. Today pieces of this machine can be seen on display in the Australian War Memorial.

By far the greatest Australian contribution to the air war however, lay in the formation of bomber and attack squadrons consisting of Nos. 455, 458, 460, 462, 463, 464,·466 and 467 Squadrons, all of which took part in the strategic bombing offensive aimed at crippling the vital industries of Germany and the occupied countries under her control. The first Australian units experimented with the development of night bombing techniques later used so effectively by Bomber Command. With many of these units the mortality rate of crews was something horrifying, but nevertheless two machines recorded over 100 missions - Lancasters "G for George" and "S for Sugar", both of which were preserved after the war, the former in Canberra, the latter in England.

Although such types as the Hampden, Ventura, Wellington and Halifax were widely used by R. A. A. F. squadrons, there can be little doubt that the famous Lancaster was the outstanding night bomber type of World War II. Lancasters had wings holed by falling bombs, lost elevators and tail assemblies through flak damage, suffered in-flight fires and loss of engines, and yet somehow still managed to limp back home. There is even one account of a No. 460 Squadron Lancaster flown by Flt-Sgt Christensen which was accidentally looped over the Ruhr Valley whilst carrying a full bomb load. It recovered a scant 1,500 feet from the ground, having plunged over 15,000 feet and bending its mainspar several feet in the process.

From 1942 onwards further R. A. A. F. fighter squadrons joined No. 452; No. 456 flying Defiant and Beaufighter night-fighters, and after the debacle at Singapore, No. 453 Squadron, now more happily equipped with Spitfires. Changes in equipment were made according to the availability of aircraft and two squadrons - Nos. 456 and 464 - were issued with the versatile all-wooden Mosquito in either fighter or fighter-bomber versions. It was in a Mosquito that the Australian daredevil Sqn-Ldr C. Scherf destroyed fifteen aircraft in the air and a further nine on the ground in the period of sixteen weeks; an eloquent testimony to the speed and striking power of this outstanding aircraft.

When the war drew to a close in Europe the R. A. A. F. had three fighter squadrons; Nos. 451, 453 and 456; five bomber squadrons, Nos. 460, 462, 464, 466 and 467 as well as three Coastal Command squadrons; Nos. 10,455 and 461. In varying degrees and according to their opportunities all these squadrons distinguished themselves with the sturdy British-built machines with which they were equipped.

The entry of Japan into World War II in December 1941 led to a redeployment of Australian squadrons to the Pacific. Japanese military advances and Japan's air raid on Darwin on 19 February 1942 increased pressure for better air defense over Australia. Beginning in 1942, U. S. air units were dispatched to Australia to bolster the RAAF. On 17 April 1942, all RAAF squadrons in the Pacific were placed under the auspices of Allied Air Forces Headquarters, part of U. S. General Douglas MacArthur's Southwestern Pacific Theater command.

The RAAF participated in almost every major campaign of the Pacific Theater. Four RAAF squadrons, two with Hudson bombers and two flying obsolete Brewster Buffalo fighters, fought in the 1941-1942 Malaya Campaign. Later, elements of these squadrons were withdrawn to the Netherlands Indies and finally back to Australia. Two other RAAF squadrons fought in the Netherlands Indies before being relocated to Australia. RAAF units distinguished themselves in the defense of Milne Bay in September 1942. Early deficiencies in aircraft were overcome with the addition of P-40 Kittyhawk and Spitfire fighters. The RAAF played an important role in supporting ground operations and in attacking Japanese shipping, including during the Battle of the Bismarck Sea. It also assisted in long-range minelaying operations throughout the war. The RAAF also provided wireless units to its troops who participated in the invasion of the Philippines. By the end of the war, the RAAF numbered 131,662 personnel and 3,187 aircraft.