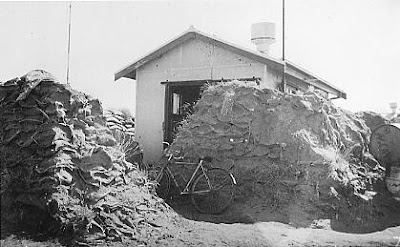 Wyndham Aeradio after the Japanese raid. Bullet holes can be seen in the upper part of the building. Note the bicycle propped out the front ready for a quick getaway

Wyndham, the West Australian coastal town close by the border with the Northern Territory, which was twice attacked by Japanese aircraft in March 1942. The first raid, carried out shortly after 10 a.m. on 3 March 1942—the same day as Broome, Western Australia, was similarly hit— involved eight Zero fighters from Koepang, in Timor. A RAAF DH–84 Dragon navigation training aircraft, which had just landed, was caught on the ground and set alight by strafing. Also set on fire was the airfield hangar and a fuel dump comprising a large quantity of 44-gallon drums which had been delivered only a week earlier. A second aircraft, a Lockheed 10 operating a commercial service for MacRobertson-Miller Aviation Co., had cleared the area just minutes before the enemy fighters arrived and thus escaped being caught up in the raid.

The second attack, again focused on the aerodrome, was conducted by seven bombers on 23 March. This saw a chain of about 30 large craters blasted along the runway, but there was no other damage. An hour later three Zeros appeared and made low-level strafing runs, but with little significant effect.

Posted by Mitch Williamson at 1:50 PM