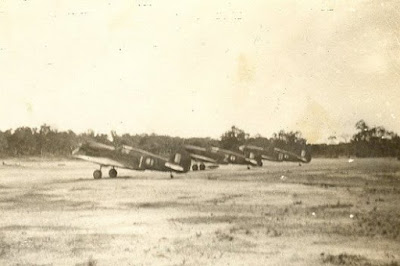 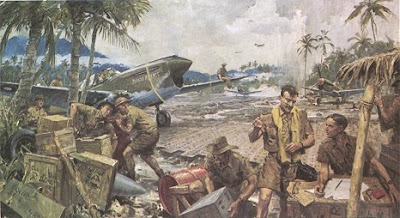 No. 75 Squadron is a Royal Australian Air Force (RAAF) fighter unit based at RAAF Base Tindal in the Northern Territory. The squadron was formed in 1942 and saw extensive action in the South West Pacific theatre of World War II, operating P-40 Kittyhawks.

Port Moresby and Milne Bay
In February and March 1942 the Allied position in New Guinea was under pressure and Japanese aircraft had been sighted over the Torres Strait Islands and Cape York in northern Australia. As a result, priority was given to basing a fighter squadron at Port Moresby in New Guinea to defend the town’s important airfields and port facilities. The RAAF received an allocation of 25 P-40 Kittyhawk fighters in late February that were flown to Townsville, Queensland and used to form No. 75 Squadron on 4 March 1942. The need to reinforce Port Moresby’s defences was so pressing that the squadron was allowed only nine days to train with the aircraft before it deployed. Commanded initially by Squadron Leader Peter Jeffrey, No. 75 Squadron’s advance party arrived in Port Moresby on 17 March and its aircraft followed between the 19th (when Squadron Leader John Jackson assumed command) and 21st of the month. At this time only four of the squadron’s 21 pilots, including its commander, had previously seen combat.

No. 75 Squadron took part in the Battle of Port Moresby between March and April 1942. The squadron scored its first “kill” on the afternoon of 21 March when two Kittyhawks shot down a Japanese bomber which was conducting a reconnaissance of the town. On 22 March nine Kittyhawks attacked the Japanese airstrip at Lae, destroying 14 aircraft (including two during a dogfight) and damaging another five; two Australian aircraft were lost in this operation though another three crashed in separate accidents on 22 March. The Japanese launched a retaliatory raid on Port Moresby the next day. No. 75 Squadron was in action over Port Moresby or Lae almost every day during late March and April, and was generally outnumbered by Japanese aircraft. As well as mounting their own attacks on Japanese positions, the Kittyhawks also frequently escorted a squadron of United States Army Air Forces (USAAF) A-24 Banshee dive bombers, which were stationed at Port Moresby. No. 75 Squadron’s casualties quickly mounted and were exacerbated by high rates of disease. Squadron Leader Jackson was shot down and killed on 28 April, shortly after he had destroyed a Japanese fighter. His younger brother Squadron Leader Les Jackson assumed command the next day. By the time two USAAF squadrons arrived to reinforce it on 30 April, No. 75 Squadron had been reduced to just three serviceable aircraft and a further seven Kittyhawks in need of repair. The squadron was withdrawn from operations on 3 May after losing two aircraft the day before. During its period at Port Moresby No. 75 Squadron was confirmed to have destroyed 35 Japanese aircraft, probably destroyed another four and damaged 44. The squadron suffered twelve fatalities and lost 22 Kittyhawks, including six in accidents.

The squadron departed Port Moresby to return to Australia on 7 May 1942. It was first located at Townsville and later moved to Kingaroy followed by Lowood to be re-equipped. During this period it also received a number of pilots who had served in Supermarine Spitfire-equipped squadrons in Europe. In late July the unit departed Queensland and returned to New Guinea.

A No. 75 Squadron Kittyhawk at Milne Bay in September 1942
No. 75 Squadron arrived at Milne Bay on 31 July 1942 where it joined No. 76 Squadron, which was also equipped with Kittyhawks. At the time an Allied base was being developed at Milne Bay to both protect Port Moresby and mount attacks against Japanese positions in New Guinea and nearby islands. Japanese aircraft made their first major raid on Milne Bay on 11 August, which was intercepted by Kittyhawks from both No. 75 and No. 76 Squadrons. In mid-August the Milne Bay defenders were warned that they might be the target of a Japanese landing, and on 24 August Japanese barges were sighted heading for the area. These vessels were destroyed the next day on Goodenough Island by nine No. 75 Squadron Kittyhawks. However, on the night of 25/26 August another Japanese convoy landed an invasion force at Milne Bay. During the resulting Battle of Milne Bay the two Kittyhawk squadrons provided important support to the Allied defenders by heavily attacking Japanese positions and intercepting Japanese air raids on the area. On 28 August the Kittyhawks were withdrawn to Port Moresby when the Japanese troops came close to their airstrips, but they returned to Milne Bay the next day. No. 75 and No. 76 Squadrons later supported the Allied counter-offensive at Milne Bay which ended with the remaining Japanese troops being evacuated in early September. Following the battle Lieutenant General Sydney Rowell, the commander of New Guinea Force, stated that the attacks made by the two squadrons on the day of the Japanese landing were “the decisive factor” in the Allied victory. From 21 to 23 September No. 75 Squadron flew sorties in support of the 2/12th Battalion during the Battle of Goodenough Island.

In late September the two Australian squadrons at Milne Bay were relieved by two USAAF squadrons, and No. 75 Squadron was redeployed to Horn Island. It subsequently moved again to Cairns for a period of rest before returning to Milne Bay in February 1943, under the command of Squadron Leader Wilfred Arthur. During this deployment the squadron operated alongside No. 77 Squadron. No. 75 Squadron flew patrols over Milne Bay and Goodenough Island, and on 14 May a mixed force of 17 Kittyhawks from it and No. 77 Squadrons inflicted heavy casualties on a force of 65 Japanese aircraft bound for Milne Bay while only a single Australian aircraft was lost. This was No. 75 Squadron’s last major air battle of the war. From August to December the squadron was issued with two F-4 Lightning aircraft for photo reconnaissance tasks. No. 75 Squadron moved to Goodenough Island in October 1943 to support the Allied offensive in the Louisiade Archipelago and New Britain.

Offensive operations
In December 1943 No. 75 Squadron became part of No. 78 Wing, which in turn formed part of the newly established No. 10 Operational Group. This group had been formed to provide a mobile organisation capable of supporting the offensives in and around New Guinea which were planned for 1944.During the first half of 1944 the squadron frequently moved between air bases to support Allied operations and was based at Nadzab from January to March, Cape Gloucester from March to May, Tadji in May, Hollandia from May to June and Biak from June to July. During this period its role was to provide close air support for Australian and US ground troops and protect Allied shipping from air attack. No. 75 Squadron was stationed at Noemfoor from July to November 1944 where it conducted long-range attacks on Japanese airstrips and shipping in the eastern islands of the Netherlands East Indies. No. 10 Operational Group was renamed the First Tactical Air Force (1TAF) on 25 October 1944; at this time No. 75 Squadron continued to form part of No. 78 Wing alongside No. 78 and No. 80 Squadrons. The squadron was ordered back to Biak by 1TAF on 2 November to provide air defence for the island, to the displeasure of the pilots who considered that they were “being taken out of the war”. Only 149 sorties were flown from Biak before No. 75 Squadron returned to Noemfoor on 11 December.

No. 75 Squadron and the rest of No. 78 Wing moved to Morotai in the Netherlands East Indies in late December 1944. The squadron arrived at Morotai on 21 December and flew 147 operational sorties that month during attacks on Japanese positions in the nearby Halmahera islands. Attacks on Halmahera and other islands in the NEI continued in early 1945, and No. 75 Squadron also flew sorties in support of US troops who were attacking the remaining Japanese on Morotai. These and similar operations were seen as wasteful by many of 1TAF’s fighter pilots and their leaders. On 20 April, eight officers including Wilf Arthur, now a Group Captain and No. 78 Wing’s commander, attempted to resign in protest during the “Morotai Mutiny”.

From May 1945 No. 75 Squadron participated in the Borneo Campaign. While the squadron’s ground crew landed on Tarakan with the invasion force in early May 1945, delays in bringing the island’s airstrip into operation meant that its aircraft could not be deployed there until mid-July rather than 3 May as had been originally planned. During this period No. 75 Squadron’s pilots remained at Morotai but conducted little flying, causing their morale to decline. Once established at Tarakan the Kittyhawks attacked targets near Sandakan and supported Australian forces during the Battle of Balikpapan in the war’s last weeks.

Following the Japanese surrender No. 75 Squadron flew reconnaissance patrols over prisoner of war camps and continued general flying. The Kittyhawks were later flown to Oakey, Queensland and the ground crew returned to Australia in December 1945 on board the British aircraft carrier HMS Glory. The squadron suffered 42 fatalities during World War II.