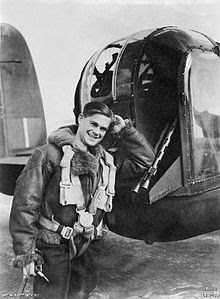 Roberts Dunstan attained a degree of celebrity as a one-legged gunner who served with Bomber Command in the Second World War before going on to a political career. He was born in Bendigo, Victoria, on 5 November 1922.
Dunstan lied about his age to join the AIF when he was just 17 and was posted to the 2/8th Field Company as a reinforcement. He joined his unit in Egypt shortly before the battle for Bardia, in which he took no part. In January 1941, outside Tobruk, he was wounded in the knee by a shell splinter. At first appearing to be not especially serious, Dunstan's wound became infected and his leg was amputated.

After convalescing in Egypt, Dunstan returned to Melbourne in July 1941 and, the following February, was discharged from the AIF. Feeling frustrated at having served for such a short time, Dunstan - while studying law in Geelong - began a concerted attempt to join the RAAF as an air gunner. Exactly one year after returning to Australia he entered No. 2 Bombing and Gunnery School at Port Pirie, South Australia.

Upon completion of the course he was promoted to sergeant air gunner and embarked for overseas service for a second time. After training, Dunstan was posted to 460 Squadron. His first operation was to Dusseldorf on 11 June 1943.

Dunstan's crew flew together over a five month period. He later recalled the fear and nervous tension as his tally of completed operations grew, all the while wondering whether he would survive until the requisite 30 had been completed. On one raid to Berlin he flew as rear gunner in Group Captain Hughie Edwards's Lancaster, a source of particular pride for Dunstan as Edwards was a well-known and highly respected Victoria Cross winner.

In October 1943 Dunstan was commissioned as a pilot officer with just two operations left to fly. On their penultimate operation, to Kassel, Dunstan's aircraft was hit by incendiaries from another Lancaster and then by a night fighter, but crash-landed safely back in England. His last operation, to Dusseldorf, was less fraught and took place the day before Dunstan's 21st birthday. He returned to Australia in August 1944 and received a degree of press attention as a kind of curiosity - a one-legged air gunner who completed an operational tour and was awarded the Distinguished Service Order.

In 1946 Dunstan published a short book about his wartime experiences, The sand and the sky. After the war he worked as a journalist and then film critic for the Melbourne Herald. In 1953 he travelled to Italy to meet the artilleryman whom he believed had fired the shell that wounded him at Tobruk, and four years later sponsored the man's son as a migrant to Australia. In 1956 Dunstan was elected to the Victorian parliament as the Liberal member for Mornington. He went on to serve as a cabinet secretary, Minister of Water Supply and, later, Minister of Public Works. He died on 11 October 1989.

England, Lincolnshire. Formal portrait of members of No. 460 Squadron RAAF, commanded by Wing Commander C. E. Martin, in front of and lined up on the wing of Lancaster Bomber 'G for George'. This aircraft carried out 90 operational missions over Germany and occupied Europe. 'G for George' is now on display at the Australian War Memorial, Canberra.


460 Squadron RAAF
No. 460 Squadron, Royal Australian Air Force, was formed at Molesworth in the United Kingdom on 15 November 1941. It was an “Article XV Squadron”, formed in accordance with agreements that implemented the Empire Air Training Scheme. The squadron became part of the Royal Air Force’s Bomber Command and joined the strategic bombing campaign against Germany. Equipped with Vickers Wellington bombers, it mounted its first raid, against the German city of Emden, on 12 March 1942.

Although it had originally been planned to re-equip the squadron with Handley Page Halifaxes in September 1942, it began operating Avro Lancasters in the following month and joined Bomber Command’s 1 Group. The bulk of the squadron’s operations formed part of the strategic bombing offensive against Germany, although prior to, and during, the D-Day landings in June 1944, it was employed in support of Allied ground operations. The squadron flew its last raid, against Berchtesgarden, on ANZAC Day 1945.

The squadron is regarded as having been the most efficient of the Australian bomber squadrons. It maintained consistently higher serviceability rates among its aircraft, set numerous operational records within Bomber Command, flew the most bombing raids of any Australian squadron, and was credited with the greatest tonnage of bombs dropped - 24,856 tons. The Australian War Memorial’s Lancaster “G for George” was a 460 Squadron aircraft. The squadron, however, suffered heavily. It lost 181 aircraft on operations and suffered 1,018 fatal casualties (589 Australian) - the highest number of any of the Australian squadrons.

Following the end of hostilities in Europe in April 1945, the squadron participated in Operation Manna, which involved the air-dropping of food to Dutch civilians during the first week of May 1945. It was subsequently employed to transport liberated Commonwealth prisoners of war to Britain. With this role complete, 460 Squadron was selected to form part of “Tiger Force”, Bomber Command’s intended contribution to the strategic bombing of Japan, which necessitated a transfer to No. 5 Group and a move to East Kirby. The war in the Pacific ended, however, before “Tiger Force” was deployed. The squadron relinquished its aircraft in early October 1945, and disbanded on the 25th of that month.