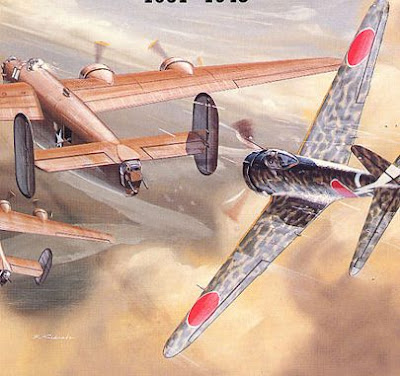 During March 1942 the 5th Sentai, based at Kashiwa, near Tokyo, converted to Ki 45kais. On 10 July 1943 this unit’s 28 aircraft set off for Malang, Java, arriving on 20th. Using Ambon, Lauten in Timor, the Aru Islands, Namlea and Babo as advanced airfields, the Sentai provided the air defence of this vast area. On 21 September two of the 2nd chutai’s aircraft took off from Langgur, intercepting nine B-24s over the Kai Islands. Here Capt Yoshiaki Yamashita shot down one bomber with 37mm cannon fire, the crew of ten surviving to become POWs.

Three more of this chutai’s aircraft patrolled over two transport vessels sailing from Java and Timor during 15-16 December. Whilst so engaged they claimed one attacking Beaufighter shot down, although one transport was damaged and was forced to beach itself, and the second was set on fire. On 5 January 1944 five Ki 45kais of the 1st chutai intercepted about ten B-24s over Ambon, claiming five shot down and two probables, for which the unit was awarded a citation from the officer commanding the 7th Flying Division.

Meanwhile the 13th Sentai, which had again re-equipped with Ki 45kais at Wakde, moved to Wasile, Halmahera, in April 1944, where it once more converted to Ki 43-IIs. It then moved to Noemfor Island on 23 April with 26 of these aircraft, but lost four during interceptions on 16th and 17 May; when Allied forces landed on Biak Island on 27 May, only ten Hayabusas remained available. On learning of the landings on Biak, Maj Katsushige Takada, commander of the 5th Sentai, led five Ki 45kais fitted with bombs from Jefman to attack. All failed to return, and this was subsequently considered to have been the first suicide attack unit, receiving a further citation on 10 June 1944, this time from OC, Southern Army.

Having recuperated in the homeland from its service in eastern New Guinea, the 24th Sentai moved to Kau, Halmahera, coming under the command of the Imperial Navy. Eight of this unit’s Ki 43s led by Capt Kojima, attacked Biak Island on 27 May, but lost four of their number. The unit continued to operate over Biak until 25 June, then withdrawing to Wasile, Halmahera. During these operations the unit lost six more aircraft on 16 June, plus several more on the ground. The Hayabusa was considered to be inferior to the Navy’s Zeros, and on 1 July the unit departed Navy command.

The 13th Sentai was in action on 28 May, escorting one of the attacks on Biak, but on 1 June this unit lost nearly all its Ki 43s during an Allied air attack on Momi. The Sentai then sought to recuperate on Halmahera, rising to intercept the first raid on this island on 27 July, but losing four of their number in so doing.

Following attacks on Biak on 3rd and 4 June, the 5th Sentai withdrew to Ambon, then flying convoy patrols over the Ambon-Timor area during which four or five B-24s were claimed probably shot down during July. At the end of August however, the Sentai withdrew to the homeland. The 19th Sentai departed Nielson Field, Luzon, on 8 July, escorting a convoy to Ambon. Here on 19 July the unit engaged 11 B-24s, claiming one shot down. However four of the fighters were damaged, whilst two more suffered damage on the ground.

Allied air raids on Halmahera now proliferated, causing the 13th Sentai to be moved back to Ambon, whilst the 24th Sentai withdrew to Langoan airfield, Menado, Celebes. Ambon too, came under attack during August, and here the Hayabusas again proved no match for the P-38s, the morale of the resident 13th Sentai falling to a low ebb. Towards the end of the month the unit withdrew to Kendari. From here it commenced operating some of the new Ki 84 fighters on interceptions and sorties to Morotai from 15 September onwards. However, in early October the Sentai was withdrawn to Japan. The 24th at Menado also intercepted air raids and participated in attacks on Morotai.

Following the US invasion of Leyte in the Philippines, the JAAF units in Negros were subjected to air attacks by Morotai-based USAAF units. In an effort to contain this activity, heavy bombers and 21st Sentai Ki 45kais were ordered to attack the bases on this island. On 5 November 1944 the 21st departed Palembang, arriving at Ambon, which is reasonably close to Menado. From here during the night of 7 November, three Ki 45kais led by Capt Kanda, attacked Morotai with Ta Dan (60kg incendiary bombs), repeating this attack during the nights of 9th and 10th. On 21st and 28 November the Sentai also made attacks on Morotai from Wasile on Halmahera, but on each occasion one or two aircraft failed to return, falling victim to intense AA fire. Attacks on Morotai recommenced on 9 December, but only small numbers of sorties could be flown.

Now however, Ambon and Wasile were becoming frequent targets for US attacks. On 27 December Lt Tomonori Onuma led three Ki 45kais from Ambon to fly to Wasile, but whilst underway they were attacked by a dozen P-47s, and all were shot down.

This brought to an end the attacks on Morotai, and indeed of Japanese Army fighter operations in this part of South East Asia. 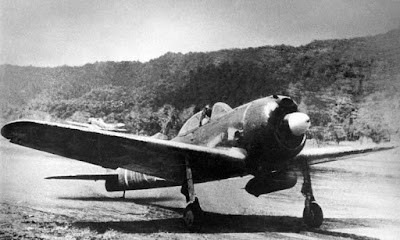 The 59th Sentai over Australia
After the Dutch East Indies had been secured, the 59th Sentai was based in Java. Here during September a 3rd chutai was formed, tasked with the air defence of Palembang and Timor.

In mid February 1943 the unit converted to Ki 43-IIs and commenced flying the ‘finger four’ or ‘Rotte’ formation, instead of the outdated and inefficient three aircraft “vic” which had previously been employed. From January onwards the 59th engaged Hudsons, A-20s, B-24s and Beaufighters of the USAAF and RAAF around Timor, where on 9 February Maj Tsuguroko Nakao, the commanding officer, was killed whilst intercepting a formation of nine Hudsons. On 20 March the new commander, Maj Takeo Fukuda, led the 1st chutai to Babo, remaining there for two weeks, undertaking convoy patrols over the Banda Sea.

On 20 June 1943, 22 Ki 43-IIs were led by Maj Fukuda to escort 18 Ki 21s of the 61st Sentai and nine light bombers of the 75th Sentai to bomb Darwin. Here Spitfires engaged, the unit claiming nine shot down and six probables for the loss of one Ki 43 and one Ki 21. 1st Lt Shohei Inaba claimed two of these victories despite one leg of his aircraft’s undercarriage having failed to retract. Two days later 20 of the unit’s Ki 43s were led by Capt Shigeo Nango on a fighter sweep near Darwin, but no defending interceptors were encountered on this occasion.

Following these two missions the 59th was transferred to New Guinea. The unit arrived at But in mid July with 27 aircraft, replacing the 11th Sentai, which had departed in late June, and the 1st Sentai, which left during August. 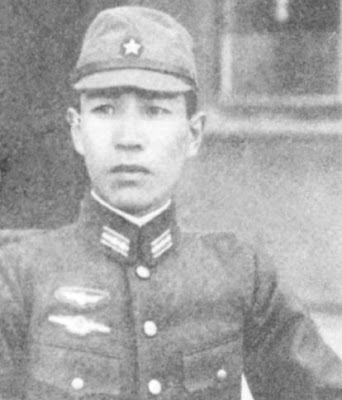 ONOZAKI, Hiroshi Captain
Hiroshi Onozaki was born in 1917 in Tochigi Prefecture. He entered Kumagaya Flying School in February 1936 with the 3rd Juvenile Flying Soldier intake, passing out in November 1937 at the head of the course, for which he was awarded a silver watch. Following fighter training at Akeno, he was posted to the 5th Rentai, but in November 1939 was transferred to the 59th Sentai in China. Joining the 1st chutai, he accompanied the unit to Indochina in December 1941, from here patrolling over Kota Bharu airfield, Malaya, on the first day of the Pacific War, and then strafing aircraft on the ground here. Over Kuala Lumpur on 21 December he first met the enemy in the air, claiming a Buffalo shot down. Moving to Malaya, he took part in raids on Singapore, and then on Palembang, Sumatra, and targets in Java. During these operations he added eight Hurricanes, a Blenheim and a Dutch Ryan trainer to his score, becoming the 59th Sentai’s top scorer at the time. In May 1942 he returned to Japan to attend the Army Flying Military Academy, returning to the Sentai in November as a 2nd Lt. Twice during January 1943 he shared with his wingmen in the destruction of B-25s over Dili, Timor, whilst on 20 June 1943 he took part in one of the JAAF’s attacks on Port Darwin, Australia, as an element leader, claiming two Spitfires shot down. Following a return to Java, the Sentai was ordered to New Guinea in July, flying in via Babo. On 15 August Onazaki (pictured back row, left) claimed a P-38 over Tsili Tsili for his 14th victory (discounting the two shared B-25s). Three days later he managed to escape unscathed from a formation of about 20 P-38s over But, but he then fell ill with amoebic dysentery, and was evacuated home. After recovery, he served as an instructor at Akeno, later being posted to the 7th Flying Training Unit at Matsumoto, where he was serving when the war ended.

Posted by Mitch Williamson at 7:34 PM